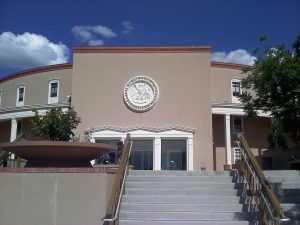 A gun control advocacy group, Everytown for Gun Safety, that poured $216,500 into New Mexico’s 2016 legislative elections is finding that one of the politicians they donated to is giving them a tough time on a bill expanding background checks for gun sales.

Everytown for Gun Safety donated $5,000 to the New Mexico House Minority Leader Nate Gentry, a Republican from Albuquerque, last June. The group also sent a mailer supporting Gentry during the election. However last Friday, Gentry joined other Republicans on the House Judiciary Committee in voting against House Bill 50, which would require background checks at gun shows or online, including gun sales by private individuals.

Gentry doesn’t always oppose gun control measures. Last year, he introduced a bill aimed at requiring extra steps before a person determined mentally ill could buy a gun. The bill didn’t make it out of committee.

But he voted against HB50 last week, he said, because he found problems with several provisions, including one that would change the rules that govern private firearms transactions between gun owners.

“When you add the private transfer prohibition it adds some wrinkles,” Gentry said.

In the past, Gentry has supported sharing certain gun sales data with the federal government and closing the gun show loophole.

But HB50 is “not well thought through,” he said, adding he found “five different problems they haven’t even contemplated. I just can’t support it. It takes some time. You got to get these things right.”

So what do you think of Gentry’s sudden change of heart. Let us know in the comments below.