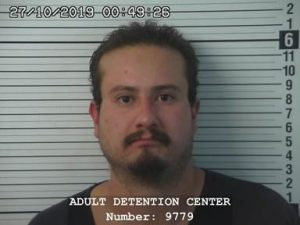 A man was arrested after he threatened a Loomis Armored Security guard last Wednesday night. According to Taos Police Chief David Trujillo, officers were called to a report of a man with a knife approaching the caller but making no overt threats.

A short time later, they received another call describing the same man had just attempted to rob a Loomis security guard walking out of the convenience store after filling the ATM with cash. The guard said he had fired at the suspect who threatened him with a knife.

Responding officers contacted the guard who described his attacker and said the suspect had walked up asking for a ride in the armored car. The guard declined the request but the suspect pulled a knife and said, “Let me make this easy for you.”

The security guard began demanding the suspect back up, but when his attacker refused, the guard drew his service pistol and continued to shout.

Finally, the suspect was close enough to grab the barrel of the sidearm and the frightened the guard discharged a round. The shot missed the suspect but caused him to run away around to the back of the convenience store towards Michael’s Kitchen.

Officers searching the area quickly located 27-year-old Jerry Lee Gutierrez and arrested him for attempting to rob the guard. He had a small wound to the hand he used to grab the barrel of the gun, which Chief Trujillo says he probably sustained from the slide cycling after the guard discharged his weapon.

Gutierrez was taken to the hospital for treatment of his minor wounds and charged with aggravated assault with a deadly weapon.

You should never, ever, let a threat get close enough to you to grab your weapon. If they are armed and refuse to listen to your commands to go away, you are legally justified and should shoot the threat.

Also, of note here is the need to practice clearing malfunctions. It’s likely that interference from Gutierrez’s hand caused the slide not to cycle fully or properly and lead to a stoppage.

Fortunately, the threat lost all motivation to continue the fight, but if he had not, Gutierrez would have been in easy striking distance with his knife and the guard would have had an ineffective weapon.

When in doubt get distance from your attacker. If they have a knife, putting a barrier between you and them such as a car or a door can give you the time needed to make a decision and/or get your weapon into the fight.